DJ Mag's annual public vote to uncover the world's most popular DJs is back for another year, evolving to fit a world where clubs are shut and to better reflect the current state of global dance music scene. You can vote here until 23rd September.

2020’s Top 100 DJs has opened for voting in a very different world stricken by the coronavirus pandemic. With clubs shuttered and festivals cancelled, dance music has become more online than ever before. For the first time, DJ Mag is running a series of Virtual Festivals where viewers can watch and listen to some of the world’s biggest DJs before voting in this year’s poll.

Broadcasting every weekend between 18th July and 20th September via YouTube, Facebook and Twitch, Saturdays will focus on the original Top 100 itself, while Sundays will feature DJs from the Alternative Top 100 DJs: a ballot that also collates data from Beatport sales and aims to throw more of a spotlight on artists who play house and techno. 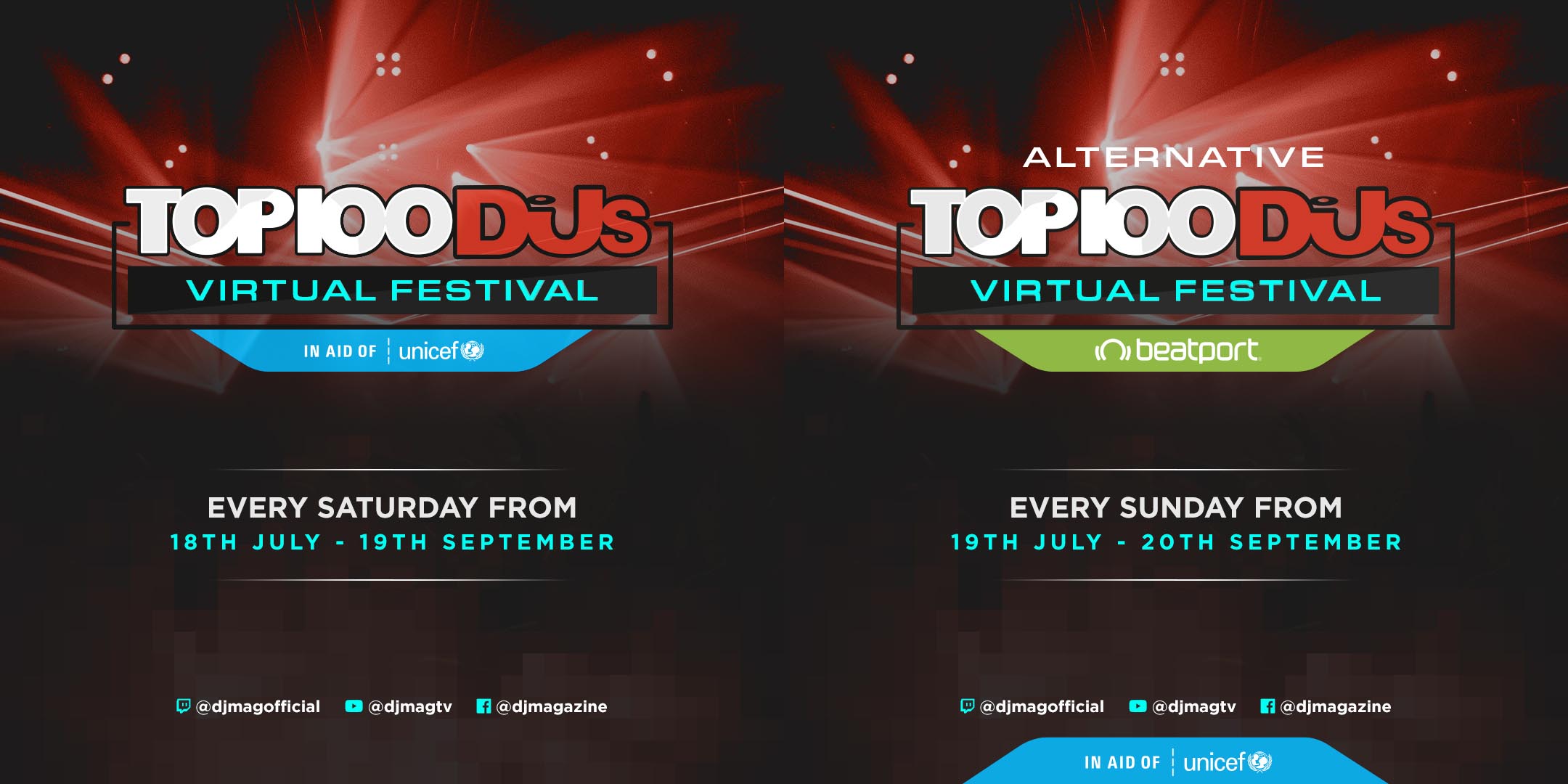 Teaming up with UNICEF for a fourth year, this time around voters in the Top 100 DJs poll will be able to contribute to the charity’s coronavirus emergency response fund. UNICEF works in more than 190 countries and ensures more of the world’s children are vaccinated, educated and protected than any other organisation. Viewers of the Virtual Festivals and poll voters will be invited to contribute, and to date participants have raised over £70,000 for UNICEF, helping to vaccinate 815, 175 children around the world against deadly diseases. If you can, please consider donating to UNICEF.

New for 2020, Top 100 DJs today announces a 12 month partnership with VirtualDJ. With more than a hundred million downloads, Virtual DJ is by far the most-used DJ software on the market, and has a recognised history of technical innovations that have shaped digital DJing for the past 20 years. This year, VirtualDJ has introduced a game-changing technology — real-time stems separation — in their DJ software. This new technology is opening a new frontier for DJing that will deeply impact how DJs can mix in the years to come, and felt like the natural companion this year to the world’s leading DJ poll. VirtualDJ will be visible across the voting process and social media results reveal, and DJ Mag will be producing exclusive video content to be released in the coming months.

It is now a decade since the Top 100 DJs Awards Ceremony relocated from London to Amsterdam – originally in a successful partnership with ALDA and latterly (AMF) – which has allowed up to 40,000 people to witness the crowning of The World’s No.1 DJ on the main stage each year. A forthcoming announcement will detail Top 100 DJs and AMF’s plans to commemorate this landmark anniversary.

Cast your votes now at top100djs.com.

A BRIEF HISTORY OF THE WORLD’S BIGGEST MUSIC POLL

Running for 27 years, the Top 100 DJs began in 1993 as a way to celebrate 100 editions of DJ Magazine. To start with, the list was subjectively selected in-house, with the DJs chosen for their technical skill and facility for moving a crowd. A glance at the 1993 list reveals a very different selection of artists to those you’d see in recent years; a huge range of sounds and styles are represented, from the Guv'nor Andrew Weatherall and prog hero Sasha, to dub soundsystem operator Aba Shanti-I, house legends Kid Batchelor and DJ Disciple, hip-hop stalwart Funkmaster Flex, and early UK club scene pioneer Princess Julia. Techno artists such as Dave Angel, Miss Djax, Derrick May and Kevin Saunderson feature alongside junglists Dr S Gachet, DJ Hype and Mickey Finn. There was also an appearance, weirdly, from cheesy Radio 1 personality jock Steve Wright — a final callback to DJ Mag's former iteration as mobile DJing-focused publication, Jocks, perhaps. At this point, the list was also in alphabetical rather than ranked order, but that changed when the poll opened up to the first public vote in 1997. With the internet still years away from wide usage, readers had to send in their selections via post back then, and the first DJ to top the ranked listing was Carl Cox: a perennial favourite in the poll ever since.

As the dance scene became more commercial and trance entered the mainstream around the turn of the millennium, the Top 100 poll became increasingly dominated by the biggest names in the genre. Tiësto took the title in 2002, and claimed it three times in total; Paul van Dyk topped the poll twice in the mid-2000s, while Dutch trance king Armin van Buuren has commandeered the No.1 spot a record five times — four of them in a row!

While the poll was originally a gauge of the UK’s dance music tastes — dominated by artists that clubbers may have seen playing in Ibiza or at venues in the UK, for instance — as internet use became a widespread form of communication, the Top 100 poll became famous worldwide. Increasingly an international affair, with voters from 179 countries participating in 2019 and 1.3 million individuals getting involved, the poll has become a yardstick of public opinion and global dance tastes — as well as the subject of fierce debate among fans of rival DJs.

There are no categories or nominations when it comes to voting: participants are simply asked to enter their top five DJs, which could equally be personal favourites with minimal followings, or household names with millions of fans. Inevitably with enormous countries such as the USA getting involved, the most popular artists in the poll today have become the most visible (and accessible) in the public eye. The Top 100 poll has increasingly reflected the global appetite for the commercially viable EDM sound, which became a prevailing sound in the US particularly through the 2010s. EDM gave electronic music a level of mainstream popularity it had never before seen in the States, despite that being the country that spawned the culture in the first place, via Black and Latin LGBTQ+ scenes in New York and Chicago, and the Black futurists of Detroit.

When French DJ David Guetta topped the chart in 2011, angry trance fans and serious techno types alike decried the poll, but the shift was to be long lasting. Encompassing a potpourri of influences from pop, house, trance, R&B, hip-hop and hardstyle in their musical makeup, names like Steve Aoki, Martin Garrix and the most recent No.1 act Dimitri Vegas & Like Mike consistently place highly in today’s list. The popularity of hardstyle, the fast and heavy Dutch genre, has also been reflected in recent years in the Top 100, with DJs such as Headhunterz, Angerfist and Miss K8 all polling well. Meanwhile, the glossy future house of Oliver Heldens and Don Diablo has become a firm fixture.

Techno, house and drum & bass DJs, once a mainstay of the poll, rarely feature now, beyond big hitters such as Richie Hawtin, Black Coffee and Andy C. To acknowledge this musical change, the Alternative Top 100 DJs poll was created in 2018. Designed in association with the world’s biggest dance music download store Beatport, this second poll uses data collated from download sales, together with votes, to determine the biggest DJs in house and techno. Arguably more accurately reflecting the UK and the rest of Europe’s musical tastes, last year Carl Cox came in at No.1, with headline names like Adam Beyer, Peggy Gou and Charlotte de Witte all enjoying a place in the top 10.

Beyond the EDM controversy, the Top 100 has been criticised for not accurately representing the diversity of the global dance music scene. There is a noticeable lack of women, Black and non-Black POC DJs in the poll — in 2019, over 90% of the people in the list were white, and over 90% were male.

Dance music as we know it was created by Black people in the US and UK; without the contributions of artists like Derrick May in Detroit, Marshall Jefferson in Chicago, or Smokin’ Jo and Grooverider in London (plus countless others), we wouldn’t have a scene at all. In the past, the poll was more representative of the vital role of people of colour, but nowadays it appears whitewashed. During this crucial time of Black Lives Matter protests and a righteous progressive movement across the world that seeks to address systemic racism, the dance music industry is just one area that has come under increased scrutiny for its lack of awareness and whitewashing.

In the next edition of DJ Magazine we will present an anti-racism pledge to our readers, acknowledging how the magazine’s coverage has narrowed and not tried hard enough to reflect the true diverse nature of the dance scene and its roots in Black and LGBTQ communities. In addition to supporting grassroots initiatives, foregrounding diverse voices, seeking to diversify its workforce and freelance team, and overhauling its editorial policy, DJ Mag will be encouraging voters in this year’s poll to take into account the multi-ethnic spectrum of DJs, the roots of house, techno, jungle, garage and virtually any other dance music form you could name, and the way that the poll should be representative of the wider dance scene. In the Top 100 DJs poll winners reveal, DJ Mag will ask all DJs what they are doing to support Black and non-Black POC causes, with their responses published in the magazine.

In 2014, DJ Mag launched the Top 100 DJs Foundation, set up to harness the influence and reach of the poll to support worthy causes. In the past it has aided organisations such as UNICEF, Lymph & Co and Ocean Clean Up, and in the next financial year, it will commit 30% of funds from the Foundation to Black and non-Black POC causes.

The Top 100 DJs remains the world’s biggest music poll, and in 2020, nearly 30 years since its beginnings, it is evolving to better reflect the diversity of the dance music industry, and adapting to a club scene that has changed beyond all recognition due to the COVID-19 pandemic. The poll closes on 23rd September, with results announced the following month.