Object Blue's debut EP 'Do you plan to end a siege?' opens with a spoken passage, translated to read as an assertion of liberation, of freedom from subjugation. The EP, which is out now on fast-rising London label Tobago Tracks, promptly launches forth with fierce, jagged energy and relentless dynamism, offering a 16 minute introduction to an artist whose obsession with sound design and rhythm only transferred into music production a short three years ago. With ferocious percussion, hypnotic and distorted texture and complex groove, Object Blue makes a statement of presence and intent on her debut that is frankly impossible to ignore.

Raised in a Beijing suburb, Object Blue describes the environment for her musical nascence as “isolating”.

“I didn't have record stores, friends or a music scene that could introduce me to electronic music,” she explains. “I listened to a lot of classical and R&B back then – most of my tracks have an Aaliyah sample in them. But I did eventually stumble upon Björk, and her sampling in ‘Vespertine’ really informed my initial foray into the world of sound editing. Also around that time I heard Black Dog's ‘Bytes’ – the first dance album I got into, still one of my favourite albums of all time!”

“For me, sound has always been about feeling and sensing, a physical phenomenon..."

Having attended university in London between 2011 and 2014, she moved back to the UK in 2015 after a year at home in Beijing. It was upon that return to London that she started spending every weekend in the capital’s clubs, discovering a passion for dance music that she had only been vaguely acquainted with before. “I've always loved to dance, and I was discovering how good rhythm feels in music. I'm the world's worst percussionist, but I've always had a thing for rhythm, I guess. You can hear my obsession with it in ‘Do you plan to end a siege?’

What’s also evident in the EP is a fascination with sound design over strict “musicality”, and one can sense an innate understanding of sound’s physical, sensational potential in this EP more than any particular “ideas” or moods. “I think that's just my natural sonic inclination, almost beyond my control,” she explains. “For me, sound has always been about feeling and sensing, a physical phenomenon, as opposed to a representational vehicle for language-based ideas. The one exception is my 'Ecstasy of Saint Teresa' set, which is about love and intimacy. That came to me surprisingly naturally; it was the first time I wrote music while thinking about something.”

While she is learning to love DJing, Object Blue is first and foremost a live performer, using her digital production set-up to create her dark, intense sound in clubs like London’s Corsica Studios and The Waiting Room. More recently, she has been venturing into more experimental territory at smaller, more intimate gigs where the techno fuel of her club sets has been set aside in exchange for a dizzying use of mics and live signal processing. “Teenage me would be very proud,” she says.

2018 is shaping up to be an immense year for Object Blue who is set to play the wonderfully unique Ithaka festival in Granadilla in June and Leeds Industrial Museum 21st of April – “I’m planning to mic up the steam engine next door!” – as well as releasing a new EP on vinyl with London’s Let’s Go Swimming label.

Object Blue will play this Friday 23rd March at Room For Rebellion in The Yard, Hackney Wick. The party is one of three taking place that night between London, Belfast and Dublin, all in aid of the Irish pro-choice, reproductive rights campaign in the lead up to the referendum to repeal the country’s eighth amendment. Tickets are available here.

Listen to Object Blue’s DJ Mag Fresh Kicks mix below and read a quick Q&A where she highlights some of her favourite recent music and moments...

Buy 'Do you plan to end a siege' from Tobago Tracks here. 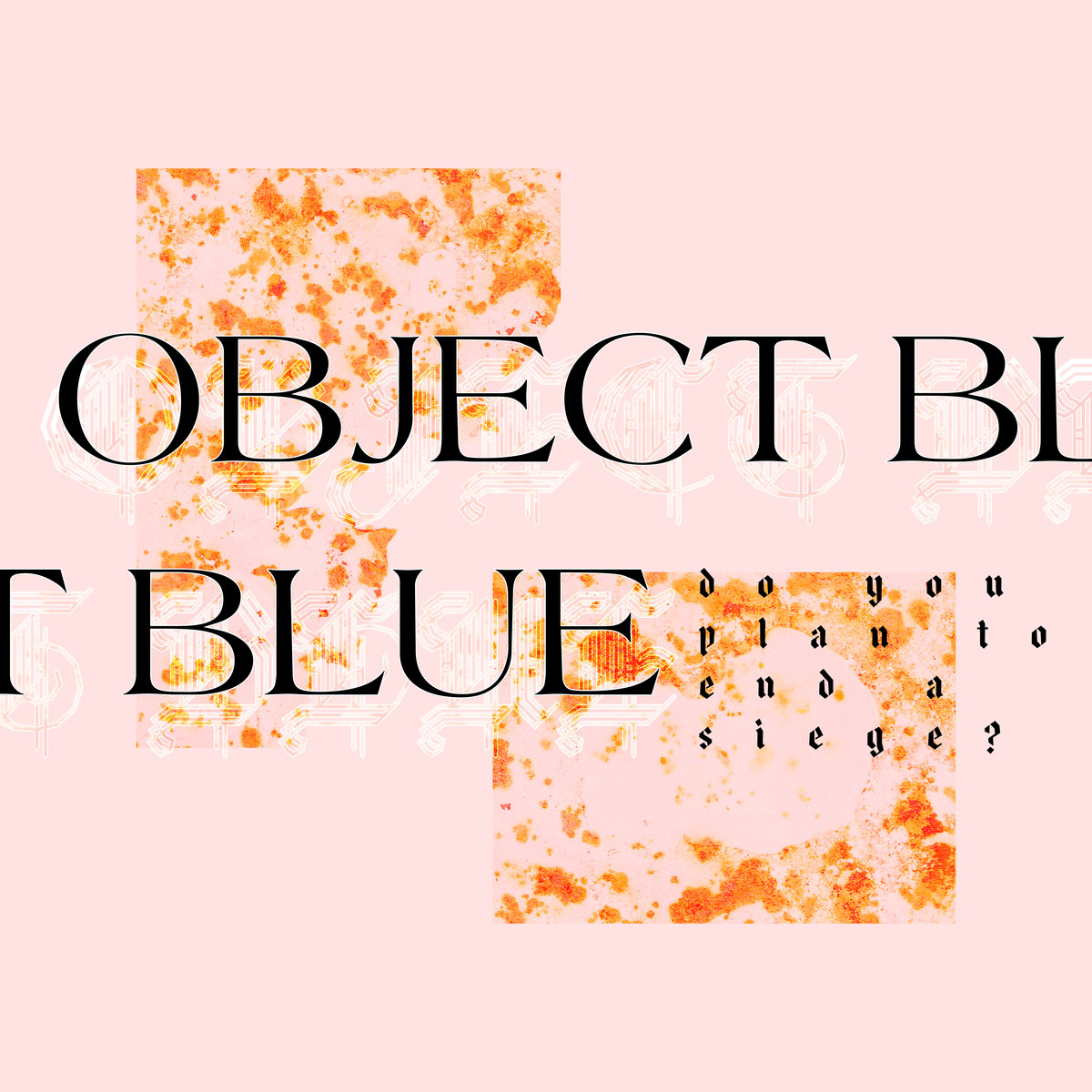 Last album you listened to in full?

Hyph11e's ‘Vanishing Cinema’. I found this thanks to Ans M including us both in her fantastic Omnii mix. The i-D documentary on the Shanghai scene is a must watch.

Last DJ/musician that blew your mind?

I only found Qebrus's ‘EXOPHOBIA x t n d’ late last year and I had to hold back from crying on the bus when I first heard it in full. Absolutely amazing.

Favourite track of the year so far?

Ausschuss's ‘Silk Law’. Well, technically it's not out yet, but you can hear me play it on my Radar show from 1st March. I cannot keep from moving when I listen to it, was dancing in the cafe yesterday...

Right now, it's WHERE TO NOW?

What record is top of your wishlist?

Corsica Studios room 2. The sound in that room is insane. I thought I knew full well how good it is, since I've spent many nights dancing there, but being behind the deck let me hear the difference in my music between my bedroom setup and the Corsica setup. I'd play there again anytime.

What's your proudest moment as an artist?

Perhaps when I played Bristol last November and everyone cheered when I triggered the bassline. I love UK bass, and I listened to a lot of trip-hop as a teen, so it meant a lot for me to play Bristol. I was purposefully going heavy-handed with bass. It made my year seeing people dancing to it, and they even clapped and cheered as I finished the set!

What’s the concept behind this mix?

These are sounds I crave at six in the morning: pretty and brutal, shimmering and heavy.

Eoin Murray is DJ Mag's digital staff writer. You can find him on Twitter @eoin_murraye.